The Pope in Britain

The Pope is in the UK for less than 24 hours, and he’s already calling the majority of us Nazis. The ex-Nazi Youth member, who brought back into Catholicism a bishop who claims the holocaust never happened and Jews are the enemy of Christ; the Pope turned leader of a mass child sex cover up, said:

Even in our own lifetime, we can recall how Britain and her leaders stood against a Nazi tyranny that wished to eradicate God from society and denied our common humanity to many, especially the Jews, who were thought unfit to live.
I also recall the regime’s attitude to Christian pastors and religious who spoke the truth in love, opposed the Nazis and paid for that opposition with their lives. As we reflect on the sobering lessons of the atheist extremism of the twentieth century, let us never forget how the exclusion of God, religion and virtue from public life leads ultimately to a truncated vision of man and of society and thus to a reductive vision of the person and his destiny.

It’s an often repeated manipulation, that Hitler was Atheist. He wasn’t. Nor did he wish to strip the State of religious influence. I’d go further, and suggest that centuries of anti-Jewish sentiment spewed by the Catholic Church, had far more influence on the anti semitic sentiment in Germany of the time, than non-belief ever had.

My feelings as a Christian points me to my Lord and Savior as a fighter. It points me to the man who once in loneliness, surrounded only by a few followers, recognized these Jews for what they were and summoned men to fight against them and who, God’s truth! was greatest not as a sufferer but as a fighter. .. How terrific was His fight for the world against the Jewish poison.

“Today they say that Christianity is in danger, that the Catholic faith is threatened. My reply to them is: for the time being, Christians and not international atheists are now standing at Germany’s fore. I am not merely talking about Christianity; I confess that I will never ally myself with the parties which aim to destroy Christianity.”

“We were convinced that the people needs and requires this faith. We have therefore undertaken the fight against the atheistic movement, and that not merely with a few theoretical declarations: we have stamped it out.”

“National Socialism neither opposes the Church nor is it anti-religious, but on the contrary, it stands on the ground of a real Christianity.”

In 1939, Cardinal Orsenigo was sent by Rome to celebrate Hitler’s birthday. Pope Pius XII started an annual birthday celebration tradition for Hitler in fact. The Catholic Church each year would send “warmest congratulations to the Fuhrer in the name of the bishops and the dioceses in Germany”.

Here are some lovely Catholic Bishops, showing their love for The Nazis. 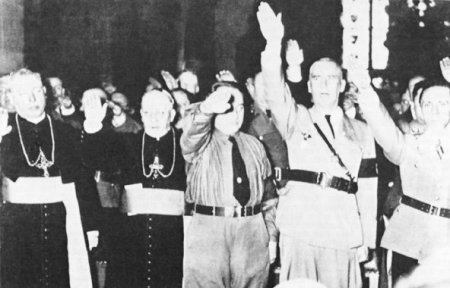 – You can tell they’re not Atheists, because we wouldn’t wear such pathetically elaborate costumes.

Here is a page from a German kids book, made by the Nazis: 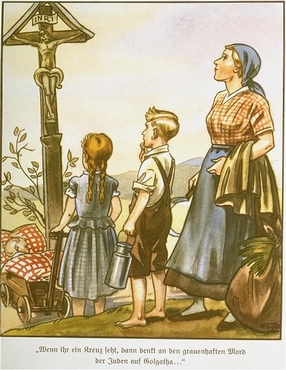 It reads:
“When you see a cross, then think of the horrible murder by the Jews on Golgotha..”
Anti-Jewish propaganda, pointing out that Christians have a duty to hate Jews. Atheists didn’t say this. We didn’t want this.

In 1933, the Vatican and the Nazis signed the ‘Reich Concordat’ which in exchange for the Pope’s power over Catholics in Germany, meant that the Vatican would encourage Catholics in Germany to leave politics (at that time, they were very powerful) and allow the Nazis to centralise power, with no opposition. This allowed the Nazis to take full control of the Country, and progress to the next level, and we all know how that turned out. The Vatican said nothing on the issue. According to writer John Cornwell:

“On July 14, 1933, after the initialing of the treaty, the Cabinet minutes record Hitler as saying that the concordat had created an atmosphere of confidence that would be “especially significant in the struggle against international Jewry.” He was claiming that the Catholic Church had publicly given its blessing, at home and abroad, to the policies of National Socialism, including its anti-Semitic stand.”

In 2009, the Pope lifted an excommunication on a Bishop who is an out of the closet Holocaust denier. Bishop Richard Williamson, whom this Pope brought back into the fold of Catholicism, the same Pope who tells we Atheists that we are Nazis, claimed that Jews were the “enemies of Christ“. He blames Catholic Church corruption, on Jews. He claims Jews are fighting for World domination. He claims there is no evidence that 6 million Jews died in gas chambers in Nazi Germany. The Pope brought him back into the Catholic fold.

Perhaps the Pope should spend less time referring to Atheists as Nazis, and more time trying to rid his Church of systematic sex abuse, anti-semitic bishops, and changing its horrific stance on AIDS in Africa.

This entry was posted on Thursday, September 16th, 2010 at 9:02 pm and is filed under Uncategorized. You can follow any responses to this entry through the RSS 2.0 feed. You can leave a response, or trackback from your own site.

7 Responses to The Pope in Britain