The Elephant in the Womb

If the Republican Party left 2012 hoping to start afresh – following a President election defeat that quite comically they were certain that they’d win – in an attempt to broaden their base, inclusive of both the Hispanic community, and women that abandoned them in huge numbers; by mid 2013, they’ve failed horrifically on both of those counts.

As noted yesterday, in my article on immigration reform, the obvious attempts by a few outspoken Republicans to put a halt on legalising 11,000,000 undocumented workers only works to narrow their base even further. They appear wholly antagonistic, when they need to be appearing far more inclusive. It seems they’ve learnt nothing in past seven months.
67 votes in the Senate yesterday secured proceeding with the immigration bill on the basis of the Border security amendment.

Today, the focus is on their renewed war on women. The 21st Century Republican Party appears to be based on one simple sentence: “Get Government out of everything (except a woman’s womb)“. Yesterday, Republicans in the Texas State House of Representatives cowardly voted to restrict access to abortion by 97-33 on an anonymous Bill made up of past Bills that had failed in the House during the regular session. The Senate had already passed the Bill, but the Amendment to restrict access to abortion was added at the last minute by House Republicans. The Bill was voted on and passed at 3:23am. It must now return to the Senate. Cries of ‘Shame on you’ could be heard as the Bill was passed in the dead of night by cowardly Theocrats.

State Democratic Senators have today announced they will filibuster the vote in the Senate until Midnight tonight, when the session officially ends. If that happens, Governor Perry, a pro-life advocated, but on whose watch 250 people have been killed by the State’s death penalty, which he so shamefully boasted of during the Primary debates, could call for a special session of the Legislature to take place, for further discussion of the Bill. We shouldn’t be surprised if he does this.

If the Bill were to pass, it would threaten the running of abortion clinics across the State. Many may close. Again, Republicans promoting very dangerous anti-women policies.

The bill to restrict safe access to abortion is quite obviously not the first time Republicans have taken aim at women. It is a growing trend for the GOP. We see the nature of the debate on abortion from the right winged fringes, when presented with campaign literature like this: 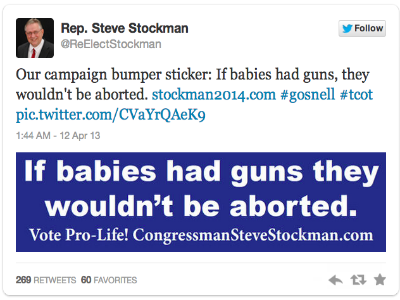 Stockman goes one further. He doesn’t just take aim at women, but also the transgendered community, and why he believes the Violence Against Women Act should not include them:

“This is a truly bad bill. This is helping the liberals, this is horrible. Unbelievable. What really bothers—it’s called a women’s act, but then they have men dressed up as women, they count that. Change-gender, or whatever. How is that—how is that a woman?”

Similarly, in 2010 Medina County Republicans put out a leaflet that included this little gem:

It isn’t just Republican men that are obsessed with both patronising, and controlling women. Republican women seem to be just as awful. Rep. Ann Wagner (R-MO) wants to recruit women to the Republican cause in 2014. She says:

“Women need to be asked. They have to be told of the opportunity and be encouraged to run.”

– That’s right! Women need to be told of the fact that they can run for public office. Really slowly. So the pretty things can understand. Perhaps their minds are too filled with getting dinner ready for the man of the house, in between thinking of kittens and flowers.

“If we took away women’s right to vote, we’d never have to worry about another Democrat president. It’s kind of a pipe dream, it’s a personal fantasy of mine, but I don’t think it’s going to happen. ”

– Even female Republicans, are anti-women. Some, cloak their inherent anti-women sentiment, behind creative, and horrendously offensive statements. The level of debate in the Texas House of Reps can be summed up quite wonderfully, by the statement of State Rep. Jodie Laudenberg (R):

“In the emergency room they have what’s called rape kits, where a woman can get cleaned out,”

– Cleaned out? Really? That’s what you’re going with? Let’s also not forget that beyond the horrendous sentiment, she’s also entirely wrong. A ‘rape kit’ is used primarily to collect evidence, it isn’t used to perform an abortion. She is using the issue of rape, in order to pass an amendment, by blatantly lying.

A couple of days ago, Mississippi Gov. Phil Bryant (R) stated that problems with the US education system began, when women started working outside of the home.

“Watch a sonogram of a 15-week baby, and they have movements that are purposeful … They stroke their face. If they’re a male baby, they may have their hand between their legs. If they feel pleasure, why is it so hard to believe that they could feel pain?”

– What’s most worrying about this, isn’t the level of stupidity that public debate has seemingly fallen to, but the fact that Burgess is a doctor of obstetrics and gynecology. Here is what the GOP would call an expert in their ranks, on the subject of reproduction. Would anyone let this man check you over?

It seems pretty obvious, private citizens do not want Republican Senators and Representatives taking ownership of their wombs.

In 2012, Wisconsin voted to repeal the Equal Pay Enforcement Act; a law that helped to address the growing pay gap between men and women. Upon repeal, Republican State Senator Glenn Grothman said:

“You could argue that money is more important for men. I think a guy in their first job, maybe because they expect to be a breadwinner someday, may be a little more money-conscious.”

And then we have the mouthpiece of mad, ranting, misogynistic, Tea Party Republicans, Rush Limbaugh. When it comes to women, Limbaugh said:

“So Miss Fluke and the rest of you feminazis, here’s the deal. If we are going to pay for your contraceptives and thus pay for you to have sex, we want something. We want you to post the videos online so we can all watch.”

– Wealthy, white, conservative, male attitudes to women are simply a reactive response against a growing modern, progressive, liberal inclusive culture that they very much dislike, because it threatens their unjustifiably privileged position in life. Whether they’re consciously aware of that or not. We can attach this reactive response to almost every group conservatives take aim at. They are a threat to privilege, and Republicans are the protectors of archaic and regressive privilege.

Republicans apparently agree with Rush, given their 2011 attempts to not just cut levels of funding to, but completely cut Title X. Title X offers family planning funding and services including breast and cervical cancer screenings and preventative healthcare to millions of low income women and families. The Republicans, not content with trying to cut Title X entirely in 2011, then sought to ban Title X funds reaching the Planned Parenthood Program. A program that also offers: contraceptives; emergency contraception; screening for breast, cervical and testicular cancers; pregnancy testing and pregnancy options counseling; testing and treatment for sexually transmitted diseases; comprehensive sexuality education, menopause treatments; vasectomies, tubal ligations, and abortion. Naturally, because of the last in that list, the Republicans believe Planned Parenthood deserves no funding whatsoever, for any of its services. Some States have already completely defunded Planned Parenthood, including Tennessee, despite no State money going to support Planned Parenthood abortions. In Wisconsin, nine of the State’s 27 Planned Parenthood clinics were completely defunded by State Republican legislatures. The nine clinics provided 12,000 uninsured women with low cost, and easily accessible health care. The Women’s Health Program in Texas receives 90% of its funding from Planned Parenthood… Texan lawmakers reduced its funding from $111 to $37. Wealthy State Republicans took that away. And they ask themselves why women have a problem with Republicans?

In 2011, Republicans also wished to cut funding to The Special Supplemental Nutrition Program for Women, Infants, and Children. A program designed to help low income mothers, and pregnant women. Despite WIC funding leading to lower infant mortality, and higher birth weights, the GOP are unhappy with it, and demanded a cut of $747 million. This, alongside a $50 million cut to the Title V Maternal and Child Health Block Grant, which helps millions of impoverished and low income women and children every year. That’s not all. They demanded a $1 billion cut to Head Start, $39 million from Child Care Development Block Grant. 368,000 estimated to lose learning support in their early years, along with those mothers who rely on child care, in order to work.

From Mitt’s “binders full of women” to Akin’s “legitimate rape” to Chambliss almost whimsically shaking off the seriousness of sexual assault in the military by claiming it’s simply down to young men’s “hormone level created by nature“, to the anti-women bills and underfunding of important health services; the GOP really has a problem. It isn’t just the perception that they are anti-women. They can’t just ‘re-brand’ and hope people will forget. The things they say and do, are so blatantly anti-women, that there is no other possible perception. The GOP has an extremely long road ahead of it if it wishes to be an electable force again. At the moment, an all out, relentless attack on women’s health and reproductive rights, renders the GOP the same fringe Party of mad bigots that it was before the Presidential election.

This entry was posted on Tuesday, June 25th, 2013 at 3:27 pm and is filed under Uncategorized. You can follow any responses to this entry through the RSS 2.0 feed. You can leave a response, or trackback from your own site.

6 Responses to The Elephant in the Womb