Today, the Financial Conduct Authority (FCA) ordered the payday loan company Wonga to pay compensation worth over £2.6 million to customers who were sent threatening letters from fake law firms – Chainey, D’Amato & Shannon and Barker and Lowe Legal Recoveries – invented by Wonga. Wonga also added charges to the accounts of those struggling, threatened customers, for “administration” costs that it incurred whilst inventing law firms and sending threatening letters from them.

The weak apology that Wonga released is as expected from a careless corporate entity who “surprisingly” grow a conscience the moment they’re exposed. The Wonga PR team has obviously been working in overdrive to produce the narrative that Wonga officials will be using on this subject. A clear example: Tim Weller, the interim CEO of Wonga said:

“We would like to apologise unreservedly to anyone affected by the historical debt collection activity and for any distress caused as a result.

– “Historical debt collection activity“. Incredibly creative and manipulative corporate term, devoid of all meaning, employed to mask their crimes as best as possible. But this is the line they’ll be using. Their weak, five line apology for causing unnecessary pressure for vulnerable people uses the same term:

– Their social media apologists are using the same term: 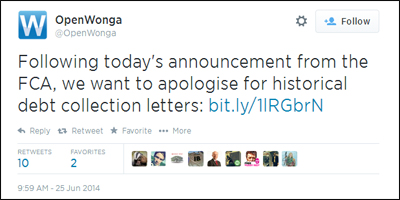 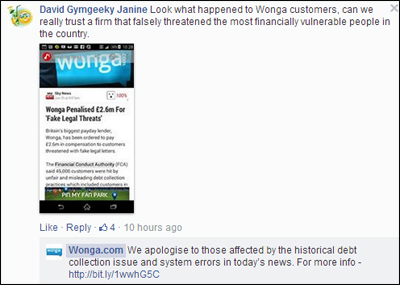 – So, that’s their CEO, their website, their social media presence, and replies to complaints; all using the same manipulative, obnoxious phrase in the hope of masking the seriousness of the offence. Which suggests a consciously devised effort to underplay the damage that their grotesque strategy between 2008-2011 (and one they’ve only just realised was wrong, on the day they were ordered to compensate victims) inflicted upon over 44,000 people.

Perhaps it is also worth noting that the policy was used between 2008-2011, immediately after a massive financial crises pushed many to financial breaking point. This was a policy designed to feed off of that misery, its timing is telling. This was a time more people would be forced to go to payday loan companies, and Wonga played on that vulnerability, seeking to harm customers, rather than help. And today they apologise, with five lines of text on a website, and a coordinated media policy. Though the use of the phrase “Following today’s announcement from the FCA…” betrays their enlightened, new found conscience. Like an unrepentant child forced to apologise after getting caught.

I wonder then, if the room they’ve sat and discussed the creative language they will be using to try to save face, was the same room they used to devise the original threatening strategy in order to harass the most vulnerable, in the first place. Because the apology leaves several unanswered questions that I’d quite like to see answered:
1) Who originally came up with the idea to invent law firms, and send threatening letters to intimidate their most vulnerable customers? Give names.
2) Which executives knew about it, and signed off on it? Again, give names.
3) Did Damelin know about it? Is that why he stepped down from the board less than two weeks ago?
4) Are those responsible for coming up with the strategy, still at the company today? If so, why?
5) If it was stopped in 2011, why has it taken the regulator to claw an apology out of you, three years later?
6) Did Adrian Beercroft – a major shareholder – know about this, before he donated to the Conservative Party?
– Wonga is run by human beings. Its strategy is devised by human beings. When the most odious strategy is exposed for the crime that it is, those sociopaths responsible for inflicting it upon so many people, do not get to hide behind the corporate name. It is well within the public interest to know if these people are still at Wonga, and if they are no longer at Wonga, where are they now? If they are no longer at Wonga, do the businesses they now work for know who they’ve employed? In the interests of what Wonga call:

“…the principle of transparency on which our business has been built…”

– The public (especially those directly affected) certainly have a right to know who was responsible for devising a strategy that specifically targeted the most vulnerable at a time of massive economic crises, for their own gain.

Call the free phone Wonga helpline, and ask for the names of those responsible for the threatening, invented law firm policy:
0800 840 0836

This entry was posted on Wednesday, June 25th, 2014 at 5:42 pm and is filed under politics. You can follow any responses to this entry through the RSS 2.0 feed. You can leave a response, or trackback from your own site.