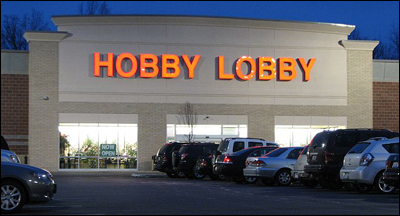 Yesterday’s Supreme Court decision to allow ‘closely held’ companies the right to opt out of secular law, to interfere with the private health decisions of female employees, based on extremely faulty premises and still receive tax benefits, shines a light on Hobby Lobby and their business dealings that might surprise many. Molly Redden at Mother Jones brilliantly reported back in April, that Hobby Lobby has been investing in the very companies that manufacture the pills they have a ‘moral’ objection with providing to their employees.

Hobby Lobby’s employee 401(k) plan held around $73,000,000 in mutual funds for investments in companies that include Pfizer, who make pills that induce abortions, TEVA who make IUDs and Humana; a health insurance company that offer surgical abortions and emergency contraceptives on their plans. Most notably, Hobby Lobby specifically mentioned IUDs, and Plan B as violating their religious principles. They submitted this objection, whilst investing in TEVA and Actevis; two companies that produce Plan B (which simply prevents the ovaries from releasing an egg – Hobby Lobby believe this amounts to murdering a baby) and IUDs.

In short, whilst Hobby Lobby have been seeking to chain women’s health and reproductive rights to the beliefs of the CEO, the company has been profiting from the very drugs they have a ‘moral’ objection to. It’s perhaps also worth noting that Hobby Lobby still covers Viagra for men. Whilst female employees will no longer be able to request morning after pills (manufactured by companies Hobby Lobby invest in, and perfectly acceptable to Hobby Lobby prior to the ACA) on their health plan, men will still be able to request help for erectile problems. The argument seems to be that Viagra aids procreation whilst Plan B and IUDs prevent it. One wonders then how they defend the fact that Hobby Lobby still covers vasectomies for men.

The Hobby Lobby management have appointed themselves the decisions makers for the health and wellbeing of female employees by mandating the boss’s religious views upon employees, whilst simultaneously violating their own apparent ‘moral’ standard when profiting is involved. Hobby Lobby is an extension of the Christian-Right’s war on women, masked as ‘religious freedom’, and completely irrelevant when there’s an opportunity to make more money. I guess the Jesus was wrong, when he said:

“No one can serve two masters, for either he will hate the one and love the other, or he will be devoted to the one and despise the other. You cannot serve God and money.”
– Matthew 6:24

– Naturally, the Republican Party appear to fully endorse the Supreme Court decision. The Speaker took to his Twitter account to announce that the 5-4 court decision (the five being all men, the four being all women plus one man) was a victory for religious freedom. This shouldn’t surprise anyone given the party’s ceaseless attacks on women’s health and rights over the past few years. From Mitt’s “binders full of women” to Akin’s “legitimate rape” to Chambliss almost whimsically shaking off the seriousness of sexual assault in the military by claiming it’s simply down to young men’s “hormone level created by nature“, to refusals to renew the Violence Against Women Act, to under funding important health services and attempts to completely gut Title X of all funding; the GOP has been the political mouthpiece for obscene gender inequality for the past several years.

It seems apparent to me that if you wish for a healthcare system that ensures employees are dependent on the coverage provided by the company – that they work and contribute to the success of – for basic health and wellbeing, those employees should not be chained to the boss’s fondness for 1st century tribal Palestinian stories. The boss’s religious beliefs have absolutely no connection to the health and wellbeing and individual choices of employees. The sex lives of female employees have nothing to do with the boss of the company. There should be a set standard across the board, secular in nature. The company has no religious beliefs. It is not a person. Indeed, the Founder’s were not fond of corporate entities, believing them to be in need of careful regulation and certainly not to be treated as individual human beings. The boss’s religious beliefs should not be granted an opt out of secular law, nor should a boss be permitted the right to force thousands of employees to abide by his personal religious beliefs, where their choices do not affect his life in any way. A Jehovah’s Witness has no more right to deny an employee access to a blood transfusion, than a Christian has a right to prevent a woman making her own choices on her own sexual health. Health is vital. A company providing access to birth control does nothing to violate the religious freedom of the individual boss, but restricting access to birth control absolutely violates the right of the employee to personal choice and freedom. The CEO is not the company. The CEO is not paying for the health and wellbeing of anyone else, the employees are working for that coverage. They pay for it. The company is everyone who works for it, including the women that Hobby Lobby’s boss David Green doesn’t particularly care about, as he profits from the drugs he seeks to restrict access to, whilst ensuring men can still get it up.

This entry was posted on Tuesday, July 1st, 2014 at 10:54 am and is filed under Atheism, Secularism, usa. You can follow any responses to this entry through the RSS 2.0 feed. You can leave a response, or trackback from your own site.