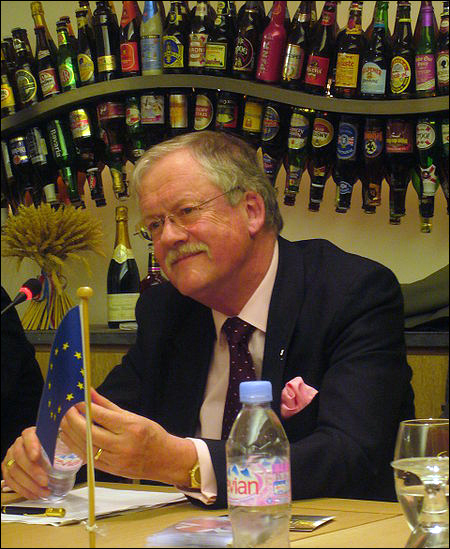 It seems the case that with the European elections on the horizon, those voting will be voting for the party rather than the candidate. Indeed, no European politician in this country – with the exception of Farage – seems to be a household name. We tend not to know whom our representative in Brussels is, instead choosing to vote for the party we most identify with at that moment in time. For that reason, I thought I’d offer a brief overview of the MEP for my area – the East Midlands – UKIPs Roger Helmer. And what an overview it is; vicious homophobia, rape victim blaming, admired by Koch funded corporate pressure group, climate denier.

It is fair to say, I am not a UKIP fan. Having spoken recently to a young Polish girl who had been disgustingly mistreated by nurses at a hospital that she had given birth at, purely for her nationality, and how she’d cried herself to sleep that night – a night that should have been a happy time, now forever ruined in her memory – I fully blame the divisive and grotesque rhetoric of UKIP among others for that. Human beings are a pawn in their game and I find them very much the heirs to Thatcher, with a hint of fear-driven nationalism thrown in for good measure. In short, the Tea Party of the UK.

We all remember the UKIP Councillor who blamed the floods on gay marriage, and we laughed. But rabid homophobia and anti-secularism seems unnervingly to be a key component to the thinking of a lot of UKIP politicians. Helmer, on kids struggling to come to terms with their sexuality (a struggle perpetuated by the idea that one particular sexuality is ‘right’ and the other ‘wrong’; a religiously motivated absurdity), said:

“If we give adolescent youngsters the wrong signal at a key period of their lives, if we glamorise homosexuals in the media, if we fail to discriminate, we risk the likelihood they will fixate on the wrong gender. We risk denying them the chance of a normal life.”

– He also wrote that the real victims are not the LGBT community still fighting for equal rights, and to be free from religiously motivated discrimination, bullying, and stigma; but the homophobes themselves:

“Many people find the idea of homosexual behavious distasteful if not viscerally repugnant. It is this perfectly biologically-determined repugnance that the homosexual lobby seeks to stigmatise with the word ‘homophobia’.”

– It’s like claiming George Wallace was the victim of the civil rights lobby.

“Why is it OK for a surgeon to perform a sex change operation, but not OK for a psychiatrist to try to ‘turn’ a consenting homosexual?”

– The implication – along with his early statement, that children might become gay if the media “glamorises” homosexuality – being that homosexuality is a mental illness that can be cured, further dehumanising the LGBT community. As if dehumanising immigrants wasn’t enough. It is about as rational as claiming a psychiatrist can try to ‘turn’ a blue eyed person into a brown eyed person. It is anti-scientific, anti-human, and a very religious position to take. Incidentally, The UK Royal College of Psychiatrists agree:

“…homsexuality is not a psychiatric disorder. There is no sound scientific evidence that sexual orientation can be changed. Furthermore, so-called treatments of homosexuality create a setting in which prejudice and discrimination flourish.”

On gay marriage, Helmer – like most absurd right wingers – argues a slippery slope fallacy, whilst defending Church opposition to same-sex marriage, as justification for restricting the rights of others, and upholding Christian supremacist ‘values’:

“…once you start to tamper with the institution of marriage, you get into some very murky water indeed. If two men can be married, why not three men? Or a two men and a woman?”

– Firstly, this implies that Christianity has some sort of inherent right to the institution of marriage in the first place, and secondly, if Helmer is correct and homosexual marriage leads inevitably to “murky waters” such as polygamy (ironically, Biblically acceptable) then we must accept that heterosexual marriage lead to homosexual marriage, and so in fact the very institution of marriage itself, starts the ball rolling down the slippery slope. The only way out of that slippery slope, is to claim “traditional” marriage should continue to be defined along religious lines. And that’s fine if you’re a Christian; simply don’t have a same sex marriage. You however have no right to enshrine your self-claimed ownership of marriage into law, restricting the rights of anyone else. Helmer’s argument by its very nature, is one that seeks to impose religious “values” on everyone. Roger Helmer is anti-secular.

Whilst seeking to restrict the rights of the gay community, and subtly hinting that they’re all mentally ill, Helmer said that the word ‘homophobia’:

“…it is just a propagandist word created by the militant gay rights lobby.”

– Yes! Those ‘militants’ fighting for the same rights that Helmer himself enjoys, whilst referring to those who simply wish the same rights as “…distasteful if not viscerally repugnant“.

Echoing a number of US Tea Party members, Helmer also isn’t a big fan of women. In 2011, on his blog, Roger Helmer said that in the case of rape’:

“…the victim surely shares a part of the responsibility, if only for establishing reasonable expectations in her boyfriend’s mind.”

– Yes. He said that. In fact, here’s the blog in question.

He goes on to say:

“It is naive for a woman to undress and get into a man’s bed and not expect him to draw the obvious conclusion.”

– A creative way to say “you brought this on yourself“. Roger Helmer believes that the victim shares blame for being raped. Those poor rapists. I’d suggest that if Roger Helmer believes this, he poses a danger to women, not just for how he votes, but for the fact that he’s clearly unable to control his sexual urges, and considers “establishing reasonable expectation” as a justifiable excuse for violating the autonomy of the body of another human being.

As UKIP seem to be positioning themselves as a party of the ordinary working people, it’s probably worth noting that Farage himself is an ex-city trader, and that Helmer was appointed ‘Adam Smith Scholar’ by American corporate funded right winged pressure group ‘American Legislative Exchange Council’. ALEC is funded by corporate donors, including in 2009, over $200,000 from the Tea Party funding Koch brothers. The same family that funded right winged extremists during Kennedy’s Presidency, and orchestrated the 2013 government shutdown, seeking to denying the ordinary working people affordable healthcare. Helmer – being a climate skeptic – was also a key speaker at The Heartland Institute’s Seventh International Conference. The Heartland Institute also received funding from the Koch brothers, as well as – predictably, given the subject – big oil companies and big tobacco companies. UKIP are the Tea Party of the UK, in every way possible.

So for all his climate denying, and speaking on the topic to institutes funded by big corporate interests, imagine my surprise when at the previous European election, we had a leaflet through our door for Helmer’s campaign – he was a Tory at the time – that read:

– This part of the leaflet, was a major factor for the Helmer campaign, given that it had an entire section dedicated to:

“Evidence is quite clearly emerging that man is not having the impact on the climate that the EU climate alarmists claim.”

– The leaflet was a blatant lie, given that according to ‘Friends of the Earth’, Roger Helmer has one of the worst voting records when it comes to the environment, in Europe. The campaign literature gave the impression that Helmer had ‘played a key role’ in cutting carbon emissions, when in fact the opposite is true. And he’s proud of it.

I often write on the absurd and often offensive and hideous remarks and actions by US Tea Party members toward every minority that possibly exists. They seem entirely divorced from reality, a threat to human liberty and dignity, funded by corporate interests, and yet, my own area in leafy middle England appears to have elected one of them – a homophobic, religious supremacist, corporate, rape apologist, victim blaming, misogynistic, climate denier – and looks set to re-elect him. And so, if you’re in the East Midlands, get out and vote on May 22nd. I am embarrassed to know that in Europe, the area that I live is represented by Roger Helmer. We are not like him. The East Midlands deserves far better.