Dawkins, Hasan, and the Tale of the Night Journey. 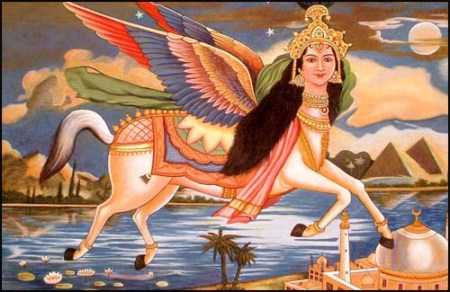 At the end of 2012, Richard Dawkins met with Mehdi Hasan to discuss religion as a force for good or evil, and if religion can coexist with science, at Oxford Union. During the talk, Hasan was asked if he believed that the Prophet Muhammad flew to heaven on a winged horse, in reference to al-‘Isrā’ wal-Mi’rāj. His answer was yes, and you cannot prove he didn’t. I wanted to address this answer, because it seems to be the argument from people from the three major religions, that their ‘miracles’ are believable, and thus, rational, because Atheists are unable to prove that they didn’t happen. Moses parted the sea, we can’t prove he didn’t. Jesus returned from the dead. We can’t prove he didn’t. Noah managed to fit millions of species into his boat. We can’t prove he didn’t. The Prophet flew 700 miles on a winged horse named al-Buraq (though, this detail is not mentioned in the Qur’an, but in later Hadith) and up to heaven from Jerusalem, met Jesus, Adam, Abraham, and Moses, all in one night. We can’t prove he didn’t. And so to believers, this suggests that if we can’t definitively prove he didn’t, it somehow increases the probability that it happened, to “checkmate Atheists!”. I find this a uniquely unintelligible position to hold.

Firstly, I wanted to discuss what I believe to be the motive behind Sura 17 of the Qur’an that briefly mentions the Night Journey. As noted in my previous article, the oldest Qur’anic text we currently have – Sana’a manuscript – dates back to the rule of fifth Uyammad Caliph, Abd al-Malik ibn Marwan. I have come to the conclusion that Abd al-Malik was an exceptionally gifted ruler and political genius. The foundations of the Islam we know in the 21st Century, can be traced back to him. The legends around the Prophet Muhammad, can be dated back to him. The bringing together of tradition, state power, dynasty legacy, and religion, can be dated back to him. He knew how to secure an empire. He was a master of PR. Muhammad’s name was used to strengthen Abd al-Malik’s position as Caliph. One of his most impressive shows of power and wealth, can be seen with the Dome of the Rock and the ‘expansion’ of Al-Aqsa Mosque. The importance of this project cannot be underestimated. It’s placement – in the centre of Jewish Jerusalem, and towering above the Church of the Sepulcher – was a show of power. In a single architectural blow, al-Malik had overpowered thousands of years of Jewish and Christian history, in their most Holy of places, and designated himself and his dynasty as its successor. The winged horse, the flight, is irrelevant. The point was the importance of Jerusalem.

To link the Prophet – who never stepped foot in Jerusalem – to Jerusalem, al-Malik needed to be creative, and to send out a powerful message that this city now belonged to the new empire, and the new dynasty. The first step, was to create the most impressive architectural marvel; the Dome. Now, he needed to link this to the new religion that would be the centrepiece of the new empire (religion and empire were intrinsically linked, this wasn’t lost on al-Malik). But there was no obvious link at first. Afterall, the Qur’an names the spot that the Prophet flew to as “the furthest place of worship“, not Jerusalem. There is no reason to suspect the Qur’an meant Jerusalem. Al-Aqsa mosque was not built during Muhammad’s life time. There was no mosque in Jerusalem at this time. The myth must have developed later (though some Muslim writers have found elaborately creative ways to get around this glaring mistake). And so, It will not come as a surprise to you, that the Mosque in Jerusalem, was built by the Uyammad’s, just as a narrative was developing. And so we see attempts from that era, to link the Ka’bah in Mecca, to Jerusalem. To do so, creates a city of Islam out of the city of Jerusalem.

There are two possibilities: Firstly, Muhammad flew on a winged animal, to the middle of Jerusalem, and then up to heaven, which he did either by passing through a portal to another dimension, or… there is a physical place called Heaven somewhere in the universe…. he then met with the obvious characters from the Biblical and Jewish narratives (coincidentally), and then came back (we can discount the spiritual interpretation, because Hasan is quite clear that he believes the Prophet DID fly to Jerusalem and then to heaven). He passed this story on, which continued to be passed on word for word, until the Qur’an was written down, and further discussed in Hadith.

Or secondly, it is all myth. And it started around the time we’d expect, given the PR effort the Umayyads were making to secure their dynasty by appealing to the earlier history of the Arab surge out of Mecca, in an attempt to forge an imperial identity.

I’m inclined to go along with the latter, and I say this because it is the only rational position one could possibly adopt, after studying the evidence, and weighing the probability of the two options. To believe the former, you dismiss the latter, and by doing so you must conclude that the laws of physics are in fact, not laws after all. They can be broken. You also have to decide whether ‘heaven’ is a supernatural realm, in which case al-Buraq managed to pass through a magic portal to get there, or ‘heaven’ is in the universe somewhere, in which case, where? How fast must the winged horse travel to get there? Either way, you see there might be trouble with the finer details of your story. If you chose to believe the story of the night journey, you have a lot of evidence building to do in order to destroy the very foundations of all science. I look forward to your thesis.

Indeed, belief in the validity of al-‘Isrā’ wal-Mi’rāj, means that the work of thousands of wonderful scientists, those who laid the foundations of our understanding of physical universal principles, must be wrong. That their work, built upon by thousands more well established, peer reviewed scientists from across the planet, repeated experiment, with centuries of thorough investigation and intense calculations and evidence building; must be wrong. To suggest that these principles that have been slugged out over centuries to give us a firm understanding of the way the universe works, are all actually wrong, requires more evidence than simply “well, you can’t say that he didn’t“. To believe it to be true, means you directly contradict, and in fact, dismiss, all known phsyical properties of the universe. You cannot claim reason, after abandoning reason.

The two positions; that of “he did fly to heaven“, and “he didn’t fly to heaven“, do not have equal weight. The evidence is weighed heavily in favour of science. It is true, I cannot prove beyond any doubt, that the Prophet Muhammad didn’t fly on a winged animal, to heaven. I wasn’t there. But I can make an educated guess, using what we know of the universe and the laws it operates under, because we have nothing to suggest those laws are untrue in any way. Even if suddenly evidence were provided to suggest that universal principles can be broken, we would then need to provide evidence that they were indeed broken on that particular day. A suggestion, in an 8th Century book is not evidence. It is no more evidence, than if I were to write down that I have an invisible monkey that flies me to the moon every Sunday. And it requires of me than just “You can’t prove otherwise.”

If I am to contradict & dismiss absolutely everything we know about the fundamental workings of the universe, then the burden of proof is on me to show that it is at least possible first, and then to show that it did happen as I say it did. As far as I am aware, no religious “miracle” has so far destroyed the foundations of modern science in that way. This includes the night journey.

“Do you regard them all [people who believe in God and the supernatural] as intellectually inferior to you?”

– But I Think Hasan has the question the wrong way round. It seems to me, if you’re willing to so flippantly and easily believe a story that contradicts and disregards extensive research, studies, evidence of all those who have dedicated their lives to the pursuit of understanding of the laws of the universe, and forcefully squeeze your book of unsubstantiated myths and legends, without any evidence to back up what any of it says; you’re the one who believes yourself to be intellectually superior, not just to the person you’re talking to, but to the entire scientific community. Hasan says “I’m willing to say, I can’t prove that he did“. This is irrelevant. If you’re a Muslim, you believe that Muhammad flew to heaven on a winged animal, because the Qur’an and Hadith say so. You therefore believe it more probable than not, which in turn means you believe all scientists to be mistaken. This is a sense of intellectual superiority on an extreme level. Dawkins is simply reflecting the work of thousands of scientists – including many incredible Islamic scientists – when he suggests that the Prophet did not fly to heaven on a winged animal. This isn’t about what Professor Dawkins believes, it’s about what science has taught us. Belief of one Professor is irrelevant.

It seems more probable to me that the universal physical laws, which have never been observably broken, and show no reason to believe they ever will be; were not suspended to allow a man to fly around on winged animal that can either break the speed of light, or can travel between dimensions. It seems far more probable that the story of the night journey was created to provide more strength to a brilliant dynasty that had become obsessed with creating a narrative to justify its power. Thus, staking their claim over Jerusalem. Then came coins, huge stunningly crafted buildings of wealth and prestige in politically important places, patronage of great artists and poets, the centralisation of power into a more bureaucratic state, the nationalisation of Arabic as the language of Empire, and a need to link all of this back to the man that was – undoubtedly – considered the hero of the Arabs in the 7th Century, Muhammad. This all happened at the same time, for the same purpose. This isn’t coincidence. This is design. This is Abd al-Malik’s, and his sons design. The night journey conforms to that design perfectly. It is therefore more probable that the night journey is a myth, for reasons stated above, than it is probable that the physical order of the universe be broken.

The discussion between Dawkins and Hasan at Oxford Union can be seen here.

This entry was posted on Saturday, August 10th, 2013 at 8:27 pm and is filed under religion, Uncategorized. You can follow any responses to this entry through the RSS 2.0 feed. You can leave a response, or trackback from your own site.

17 Responses to Dawkins, Hasan, and the Tale of the Night Journey.