The Rise of the Regressives.

If there is one thing we political bloggers can say is true of this year, it is that 2015 was the year the regressives took centre stage and let us all know that they’re here to confuse liberal principles, to distort, and to manipulate for some time to come.

Back in March Max Blumenthal wrote a largely discredited piece filled with distortions about the life of Ayaan Hirsi Ali. Take for example this paragraph:

“In Heretic, a polemic recycling many of her past arguments against Islam, she calls for the emergence of a Muslim Martin Luther — the authoritarian 16th-century zealot who called for burning down the synagogues of Jews, whom he compared to a gangrenous disease.”

– We might here be tempted to play the illiberal ‘liberal’ game, and refer to Blumenthal as Lutheranophobic for his critique of Martin Luther. But putting aside the silly tactics that those seeking to silence critique of Islam play, you’ll perhaps note here the big manipulation in the paragraph. Hirsi Ali is not at all suggesting that Islam needs a Medieval authoritarian willing to burn down Jewish temples. Hamas already exists. Blumenthal purposely recast the point to focus on Luther’s character, when in fact, Hirsi Ali is actually suggesting that Islam needs a reformation, that opens it up far more to individual critique, that it is too dogmatic as it is, too unable to progress with the rest of the World. A critique that is either disliked, discouraged, or punished in much of the Islamic World, and dismissed as ‘Islamophobia’ in the Western World. The character of Martin Luther is irrelevant to that discussion.

A few months later, after his absurd article was dismissed for the distorted nonsense that it was, Blumenthal decided to try the same tactic again:

Of course, this is not what Ayaan did at all. She critical of the patriarchal symbolism, and the reality facing millions of people across the World because of that symbol. Blumenthal – like all illiberals, happily abandons those fighting to break down oppressive barriers, to carry on his angry grudge against something he and the regressives hate the most; a woman, a woman of colour, a woman of colour who happens to come from a very conservative Islamic background and is an outspoken critic. He cannot help himself. But it’s not even subtle manipulations, and so it’s easily discredited.

Back in June, Nathan Lean – now with Tell MAMA – criticised a book by Maajid Nawaz and Sam Harris, in exceptionally racist tones:

Whilst the rest of us see a collaboration between Nawaz and Harris as two people having a conversation and sharing thoughts, Lean sees the book as a white supremacist, and his non-white ‘validator‘. Note the set-up is that the white man, is the one leading, thus denying the brown-skinned Muslim man an independent thought. Why not argue that Sam Harris is the ‘validator‘ to Maajid Nawaz? This is the racism inherent to trying to silence criticism of one idea, by falsely linking criticism to ethnicity, and then desperately clinging to it when it’s quite clearly false. You end up boxing thoughts and ideas into very specific groups by skin tone, and then you have to try to justify it when it’s clear that it isn’t true. Which of course, makes your case even worse.

Speaking of those seeking to dismiss the thoughts of all those who aren’t white, CJ Werleman took to social media yesterday, to accuse a 7 year old Richard Dawkins of  loving”colonialism“: 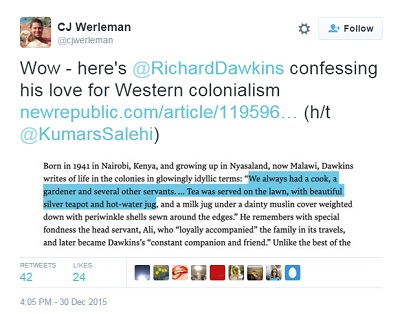 To the average reader, Richard Dawkins is actually remembering how happy he was as a child. I was pretty happy as a child too, despite the war in the Falklands. To CJ Werleman, 7 year old Dawkins was actually a young white supremacist, expressing his delight at colonialism.

This bizarre attack from Werleman comes a few days after his usual racist bigotry, in which he strips anyone who isn’t white and doesn’t fit into his neat little white-supremacist narrative, of their ability to think for themselves. Of Canadian writer and physician Ali Rizvi – an incredibly intelligent man with a Masters Degree in BioChemistry – Werleman quite hideously wrote:

Take that in for a second. If you do not fit into CJ Werleman’s regressive narrative, if you are not white and you are critical of illiberal religious practices and ideas, Werleman will strip you of your individual faculties, your intellectual achievements, and dismiss you as a “white masked water carrier for empire“. It couldn’t be more racist if it tried.

Beyond racism and anger at a 7 year old, Werleman then jumped on an unsubstantiated allegation that Ex-Muslims of North America were encouraged not to criticise Sam Harris after he donated to them. EMNA completely deny the allegation, but Werleman treated it as if absolute fact. He responded:

Quite. Which is why it’s perhaps important to remember that CJ Werleman currently writes for ‘Middle East Eye’. According to Company Check, the sole director of M.E.E LTD is Jamal Bessasso. I might be incorrect here, but it would seem that Bessasso is the same Bessasso who is the former director of Samalink TV, which happens to be the  registered agent for Hamas’ Al Quds TV’s website. Feel free to search how many times Werleman is critical of Israel, and how many times he’s critical of Hamas. The imbalance might force you to agree with his statement that you lose ‘agency‘ when you work for an ‘agent‘. Werleman at this point, disagrees with himself:

He has ‘no idea‘ that the named sole director might have links to Al Quds TV. So to summarise, Ali Rizvi loses his agency to whomever he writes for. Werleman – the white man in this – doesn’t. But it’s the ‘New Atheists‘ who are racists. Of course.

Werleman isn’t the only one. Glenn Greenwald has become so regressive in 2015, there is a striking new verb making its way into 2016:

Greenwald wasted no time …… Greenwalding ….. Richard Dawkins in the past few days. You see, Richard Dawkins attended the Royal Society meeting launching a brand new Stephen Hawking Prize for Science Communication. At that meeting, Dawkins agreed to leave the conference, to answer questions on the prize, on condition that it wouldn’t be questions on religion. Immediately, a journalist from the New Statesman began questioning him on religion. Dawkins left the questioning after the journalist admitted to believing in flying horses. A journalist trying to question a scientist, at a science event, after agreeing to talk about science, hitting with questions on religion. I would have ended the questioning too. It wasn’t the purpose of the questioning or the conference. Of course, this was the perfect opportunity for Greenwald to completely invent what actually happened:

A wonderful manipulation. The top tweet implies that Richard Dawkins has ‘announced‘ that all Muslim journalists are banned from interviewing him. Interestingly, Greenwald didn’t seem too concerned when Richard Dawkins did announce that he would no longer debate young earth creationists. I guess that’s just fine.

The bottom tweet implies that Richard Dawkins ‘terminated‘ an interview ‘on the grounds someone‘ was a Muslim. If that Muslim journalist was asking about the prize they were there to actually discuss, I’m quite certain that Richard Dawkins would not have refused to answer. Both times, Greenwald has knowingly distorted the facts for the sake of his own, massively manipulative narrative.

Ryan Kearney, lowered the intellectual tone of the New Republic by sharing Greenwald’s criticisms and ALMOST coming to the fact of the matter itself:

“I happen to share Dawkins’s opinion of religion generally, and of winged horses specifically. What’s truly pathetic, though, is his excuse for walking out on Ahmed. Dawkins has debatedcreationists, cardinals, and rabbis, but he refuses to be interviewed by a journalist who also happens to be a devout Muslim?

His reasoning, as has become increasingly true of late, doesn’t hold up to scrutiny. After all, Dawkins has submitted to such an interview before, in which the journalist likewise admits to believing that Muhammad flew to heaven on a winged horse.”

Leaving aside that Dawkins no longer debates creationists (something Kearney fails to mention), he didn’t ‘refuse‘ to be interviewed. He simply wasn’t there to discuss religion. I’m not open to discussing religion when I’m in a supermarket buying my weekly shop, it doesn’t mean I hate Muslims. The implication that Kearney tries to draw is bizarre, given that he then goes on to accept that Dawkins does debate Muslims, when he debated Mehdi Hasan. On a side note, Hasan once referred to Atheists as a “people of no intelligence“, called us “cattle” and that we live “like animals“. If Dawkins had said that of Muslims, I suspect Kearney and the regressives like him, would have exploded in rage.

If we could say that 2015 was the year we saw the rise of the regressives, one can only hope that as their clear distortions become highlighted more and more, 2016 will witness their fall into irrelevance, leaving the arguments for liberalism to come from the actual liberals.