It is right that Emwazi was killed. It is wrong to manipulate Corbyn’s words.

As a critic of Jeremy Corbyn and the hideous Stop The War Coalition that he is so proud to represent, I am nevertheless tiring of the vast manipulations of the perfectly reasonable things he says. When Corbyn referred to Hamas as “dedicated to peace and social justice“, his words were clearly in context, could not be manipulated, and require a frank rebuttal given the nature of Hamas. A Labour Leader should not be referring to a fascist group of thugs as being dedicated to social justice. He abandoned every sense of liberalism the moment he referred to Hamas as “dedicated to social justice”. But – as with his words on Bin Laden’s death – often his language is entirely manipulated by my fellow critics, and it’s spectacularly frustrating, given how easy it is to criticise him without having to descend into manipulative absurdities.

So when news broke of a strike in Raqqa that killed Emwazi, I waited to see what Corbyn would say, and how his words would be used to imply something separate from what he actually said.

“We await identification of the person targeted in last night’s US air attack in Syria. It appears Mohammed Emwazi has been held to account for his brutal and callous crimes. However, it would have been far better for us all if he had been held to account in a court of law. These events only underline the necessity of accelerating international efforts, under the auspices of the UN, to bring an end to the Syrian conflict as part of a comprehensive regional settlement.” 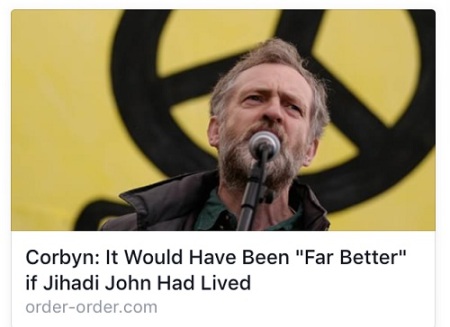 There are several issues I take with this. The headline purposely lacks context and plays on the emotions of the reader. Jeremy Corbyn – already dismissed by Guido’s fellow conservatives as a terror sympathising Britain-hater (usually by those making excuses for a Saudi regime that funded the Taliban as it killed British soldiers) – thinks it’d be “better” if a terrorist was alive. That’s it. No context. The language is purposely vague because it strikes a chord. Had he been honest, the headline would have read that Corbyn thinks it’d have been better if Emwazi was held to account in a court of law. You know, like other murderers. And so that leads me to my second observation. We might assume from Guido’s context-less headline, that the Guido Fawkes’ blog thinks anyone who has committed murder should not in fact be tried in a court of law, and should be killed, because taking a murderer through court is essentially admitting that we like that they’re alive. Imagine every headline reading “Court thinks [Insert murderer’s name] is better off alive, handing shameful life sentence!” The Guido Fawkes blog hates British values of law. See how easy it is?

Corbyn’s statement of course invites criticism. It is true that it is our principle belief in the supremacy of law and order, that we must uphold at every possible opportunity, regardless of whether Fawkes would rather just kill people than see them tried. However, I see two options with Emwazi. Firstly, the US conducts an operation after months of planning and tracking, to arrest Emwazi, get him out the country, and bring him to trial. This is spectacularly difficult given that Emwazi was in the IS stronghold of Raqqa, and would inevitably result in prolonged gunfight, almost definitely casualties, a wonderful IS opportunity to propagandise, and a big chance that Emwazi would get away, given that troops would be engaged in fighting long before getting to him. The US would also need to get him to a secure location in order to then get him out the country. The risks are huge. The second option, was a targeted drone strike on an enemy combatant, who had already murdered US citizens. This response also has the benefit of minimal risk of civilian casualties, and coincided with a Kurdish push to take back land lost to IS in the past. I see no reason to favour the former, and every reason to press ahead with the latter option, as the US did, successfully.

It may be somewhat surprising to the Christian-right on both sides of the Atlantic, that the Bible does in fact contains more verses than just those condemning homosexuality. Some of which, tend to contradict much of how those same Christians act, and what they say. For example, despite the Christian God’s demands to be worshipped, a few Biblical verses happen to contain words on humility. James 4:6 for example explains:

“God opposes the proud, but gives grace to the humble.”

– According to James, a sense of humility in your beliefs, is an attractive feature for the God of Christianity. And so I wonder how that God might respond to the bizarre lack of humility from the Christian-right, to Starbucks unveiling its new cups for Christmas.

Over here in the UK, Conservative MP David Amess is angry at the lack of Jesus on Starbucks products, and is sure it is a case of political correctnesss:

“I do think this is an example of political correctness gone mad.”
“What is Christmas about? It’s CHRIST-Mass.”
“This is utter madness. Who was the idiot who thought this up? He should be sacked!”

– Donald Trump over in the US said:

“Did you hear about Starbucks? No more Merry Christmas on Starbucks. I wouldn’t buy…. I’m speaking against myself… I have one of the most successful Starbucks in Trump Towers. Maybe we should boycott Starbucks? I don’t know. Seriously, I don’t care. By the way, that’s the end of that lease but who cares.”

– For both both Amess and Trump, every company should be constantly espousing Christian imagery in the two month run up to Christmas, otherwise they should be boycotted. It’s an interesting take on humility, when you require your beliefs to be confirmed at all times by all individuals who aren’t specifically you. Worse, for Trump, if you’re creating advertising and you don’t include a snowman, you should be sacked. Selling a product in the run up to Christmas, with no Jesus on the front? You hate Jesus! Well, with that in mind, let’s examine three websites. Firstly, the website of David Amess, then the website of Donald Trump, and thirdly the website of Starbucks.

– Not even a festive colour. All very blue. Perhaps the hat is the sort of hat Etonian Santa wears, but other than that, there’s absolutely no indication of the time of year that it might be, from Amess’ website. After going through the site, I found just a single reference to Christmas, with Amess dressed as Santa, which in no way reflects ‘Christ-Mass’: 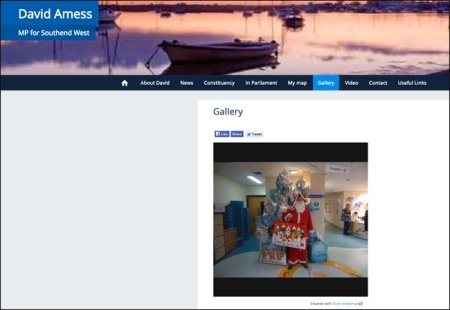 – Indeed, instead of any reference to Christ at Christ-Mass, Amess has instead used a a Pagan character.

A similar state of affairs is found at Donald Trump’s website. His front page has nothing at all Christmassy on it: 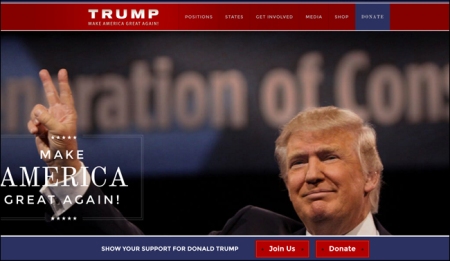 – And so I ventured into the ‘shop’ section of his website, expecting something a bit festive. At least a Christmas tree. Or maybe a mention of Jesus somewhere. But instead, I just find products covered in Donald Trump’s name:

– So, given the fact that both Amess and Trump have websites that make little to no mention of Christmas, Jesus, or any sort of outward show of festivity, what of Starbucks website – keep in mind that Trump specifically said ‘no more Merry Christmas at Starbucks;? Here’s what you see if you scroll down Starbucks’ front page:

Amess & Trump, like Starbucks, are selling a product through their sites. For Amess, he is selling his abilities to constituents. For Trump, he is selling his abilities to the entire country in the hope of securing the Republican nomination, followed by The White House. And yet, the intense outward show of Christian ideals they seem to demand of the products coming from others, and the requirement that advertisers confirm Christian beliefs, both Amess and Trump display less of on their own website.