The Human Cost of the Bedroom Tax

In May this year, Liverpool’s Riverside Housing Association called for the urgent help of the Samaritans, to deal with the rising number of people on the brink of suicide because of the misery inflicted by the Bedroom Tax. The country’s most vulnerable – and subsequently, the easiest for a Cabinet of millionaires to belittle, humiliate, and immiserate – are having to pay (some, with their lives) for the failure of the Banks, and the offshore donors love affair with the Conservative Party.

In March this year, grandmother Stephanie Bottrill committed suicide, after telling neighbours that she couldn’t afford to live any more. She could not afford the cost of living in her house, a home she had lived in for 18 years, because a government of millionaires decided she had too many ‘spare’ bedrooms.

Today the High Court ruled that the Bedroom Tax legally discriminates against people with disabilities, and so, could not be overturned by the Judiciary. The case brought by ten families who will suffer from the Bedroom Tax, had asked the court to determine that the rules do not recognise additional needs required by disabled people and families. The ten households that brought the case argued that the Discretionary Housing Payment was woefully inadequate. Shelter agreed. As did other charities in the sector. The wealthy judges, unsurprisingly, didn’t.

Firstly, it is important to note that the Court did find that the policy was discriminatory toward some disabled people. Try to remember that, when you hear the joyful response from Conservative MPs. They are expressing delight at the fact that they now have a legal right to discriminate against people with disabilities. This is the nature of the Conservative Party in 2013.

– On a side note, disabled people aren’t the only people Bob Blackman insists are less than human. He also told BBC News that gay marriage legislation was wrong “on principle”, insisting it could only work between one man and one woman….. The Mirror then exposed Blackman as a cheat. So, let’s be clear, Bob Blackman and others like him, enjoy inflicting misery on others. He has no principles. He has hobbies. Those hobbies include contempt for anyone who isn’t Bob Blackman.

What we are unlikely to hear, are the human stories from those who will be most affected by today’s decision. Those that are forced to make heartbreaking decisions. FutileDemocracy spoke to two of those people, and so here are their stories, in their own words:

Jacqueline Leeson, in Lincolnshire has two children; Ashley and Jake.
Jacqueline told me:

“One child is suspected autistic spectrum, he has social difficulties, he also suffers from short term memory, dyspraxia of the mouth and petit mals, he has a life threatening allergy to grass and is asthmatic, my other son has short term memory and also is asthmatic, my son with the social difficulties spends much of his night time talking in his sleep, falling out of bed, crying out and making dashes to safety from his night terrors, he’s now 11 and always been this way, I have a three bed house.

“A short time ago I managed to find an exchange to Cornwall to another three bedroom house. It was the closest I could get back to my family and it took over a year to find this exchange, the school down there had autistic and a short term memory units meaning both of my children would have been supported, where I live now none of this is available at all, in fact hardly any support in these area’s are available.

“Cornwall council deemed I was going to be over housed and removed me the move even though my children had been accepted in the new school and the disability care was already being arranged.

“The bedroom tax has lost my children’s right to a better education and have their disabilities supported, I’ve also lost my partner as he’s working in Somerset as there is no work up here for his industry and the distance was too far for him to travel.
My family have split up, my children have been left with the bare minimum chance of success and I’m still nearly 300 miles away from my disabled Mum who is very poorly, all because of the bedroom tax.
Jakes also had his DLA slashed as well by about £75 a week.”

– The Bedroom Tax – especially when taken with other harsh cuts – in this situation, not only punishes Jacqueline and her children, who are in a situation not of their own making, for wishing even a slightly better situation for herself and her children after years of difficulty. It is also a notice that the future must be bleak also. That their suffering is necessary. That Conservative policy, does not care much for family. That successive governments’ failure to deal with a housing crises, whilst Minister’s in control of policy – like the Bedroom Tax – such as the truly insufferable Lord Freud sat back relaxed in the comfort of luxury, knowing they didn’t have to act, because it didn’t affect them.

Freud isn’t the only one.
Liberal Democrat leader and Deputy Prime Minister, Nick Clegg insisted that the Bedroom Tax was necessary to deal with the 2,000,000 people on social housing waiting list, by evicting those in houses that have one too many bedrooms than necessary. Incidentally, Nick Clegg, upon his appointment as Deputy PM, gets to live here, somewhere among the 3,500-acre, 115 roomed estate at Chevening…. and he lives here, free: 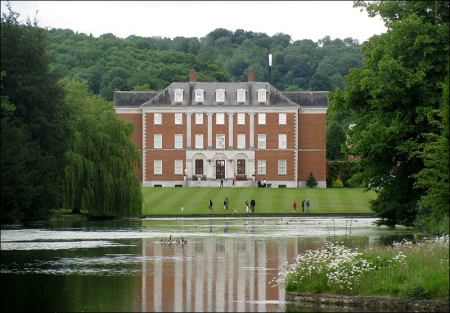 Upon appointment as Deputy Prime Minister Nick Clegg was given this 3,500-acre, 115 roomed estate at Chevening, to live in for free.
Source: Wikimedia Commons.
Author: By Dhowes9.

– Though, he does have to share the 115 room Estate, with Foreign Secretary William Hague. So, he only has 113 spare rooms really.

Sue North-Blake and her husband are having to cope with cutting down on the most fundamental necessities, like food, and heating. Their choice is; cut out meals, or leave their home. This is the reality of the choice handed to families that have to deal with the hardship of disabilities, by a government of multi-millionaires who themselves, own multiple mansions.

My disabled husband and I live in a two bed bungalow. I am his full time carer. Because of his disabilities I use the second bedroom. It is NOT spare!. We applied for the DHP but were turned down because the council counts DLA as income, and said we should be using that to pay for the room.”

“So we had to cut down on food, and in the winter the heating will just not go on. Yet if we had a night carer come in we would be able to have 2 bedrooms! The government is discriminating against married couples who need two bedrooms for medical reasons.”

So, the legacy of the Bedroom Tax is one which promotes further hardship for those in the most vulnerable of situations. Conservatives and their voters should of course be ashamed, but it isn’t surprising. This is what Conservatives do. They measure the success of a government, by the wealth of its richest, rather than the poverty of its poorest. The real shame, should be reserved for the Liberal Democrats, whose support is necessary to enact such horrendous policy decisions.

It is worth noting just who the Minister for Disabled People, Esther McVey, actually is. She spouts the usual “Labour’s legacy” defence whenever questioned on the human cost of her soulless policies. Do we really believe that if Labour had left a strong economy, a Tory government wouldn’t be doing the exact same as what they are doing now? Do we really believe that this is all due to addressing the deficit, rather than a Conservative ideological dream? Do we really believe that having spent thirty years extolling the virtues of leaving the most vulnerable to suffer by themselves, this is happening because it is ‘necessary’ rather than a Conservative ideological dream? Well, one must examine Esther McVey’s ideological leanings, for the answer. And it comes all too easily.

It is unsurprising that McVey feels it necessary to inflict more misery upon those who need the most support, given that she is a keen supporter of ‘Conservative Way Forward’, a group that dedicates itself to the further realisation of Thatcherite principles. Thatcher; ideologically dedicated to removing as much State support for the most vulnerable as possible, promoting the truly monstrous ‘care in the community’ scheme, alongside horrendously degrading and humiliating procedures in order to receive Disability Living Allowance. McVey is one part of the Thatcherite poison that infects the government and its disabled policy. The new PIP rules set to replace DLA, contain some awful details, when examined,(for example, the truly horrifying new rule that to qualify for Motability support, one must be unable to walk more than 20 metres) but again, when these people control the country, it is of no surprise that disabled people suffer the most. I’m sure joyfully slashing support for those already having to cut down on food, and having to deal with unheated homes, and care for disabled family members, pushing more and more to the brink of suicide, comes easy to the heartless Esther McVey, and the £51,737.22 she claimed in expenses alone for 2012/2013.

Hitting the Conservatives with real life stories of the misery that they purposely inflict upon the most vulnerable families, highlights just how monstrous their dehumanising policies are in the 21st century. Especially from a Party whose donors cash in so heavily on that misery.

This entry was posted on Tuesday, July 30th, 2013 at 2:54 pm and is filed under Uncategorized. You can follow any responses to this entry through the RSS 2.0 feed. You can leave a response, or trackback from your own site.

4 Responses to The Human Cost of the Bedroom Tax